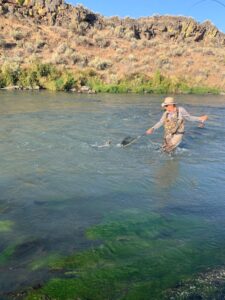 Living and fly fishing in Southwest Idaho has its benefits.  Living in the West, especially in the Treasure Valley, we soon learn to love the independence and self-reliance Idaho is known for.  If you are a fly angler who lives here we also begin to love this part of Idaho for its waters and rivers too.  We often become spoiled because we don’t have to travel far to be fly fishing some of the great rivers of the West.  This is not a bad thing at all, however if we’re not careful we can become rooted in the delusion that these great rivers are all that there are for us to fish.  Nothing can be further from the truth.

The truth is there are a tremendous number of rivers close by that just do not get the press or the reputation as being great rivers like the ones down the highway from us.  One of these quiet rivers is the Malheur River nearby in Western Oregon.  The Malheur River flows east from Juntura Oregon all the way to Ontario Oregon right on the Oregon Idaho border.  It’s roughly an hour and a half drive from Ontario Oregon to Juntura Oregon driving west on Highway 20.  Most of this drive is following the Malheur River.  The Malheur  is a tailwater river that is exclusively used to irrigate this part of the state. 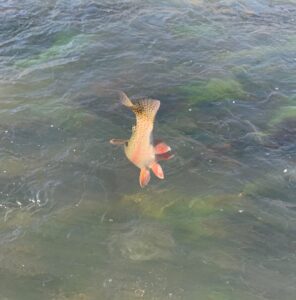 For this reason almost no one fly fishes this river.  For the most part the water in the river is warm, a tad dirty and filled all summer with a bio-mas of aquatic vegetation that just doesn’t bold well visually to fly fishing.  I have on a few occasions stopped along the Highway for a quick shot at bringing a trout to hand with the results of me going troutless.  All the people I’ve talked to over the years have said the same.  I’ve even watched a YouTube video on one guy catching a pike minnow or two on that section but that’s it.  Consequently, very few fly anglers fly fish this river.  This lack of fly fishing knowledge to the really good fly fishing the Malheur river has to offer has left this river unfished by most fly anglers who live in Idaho but not from the sparce population of fly anglers who live in that part of rural Oregon. 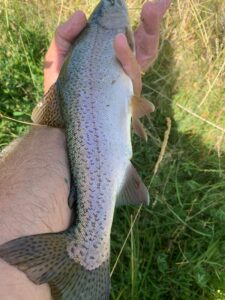 The Malheur River flows from Warm Springs Reservoir about 5 miles until it  flows under a bridge that allows traffic over the river.  This is the section you want to fly fish.  Traveling west on Highway 20 just past Juntura, turn left on Juntura-Riverside road just opposite the Beulah Reservoir Road.  Travel this maintained gravel road through beautiful lowland and pine countryside until you reach the Malheur River and the bridge that crosses it.  You will not see the river until then.  Just about a quarter mile past the bridge you will come across Riverside Campground.  Turn left, park and start fly fishing.

The Malheur River draws comparison in water quality to the Owyhee River.  Like the Owyhee River the Malheur River has a rocky bottom, is a tailwater river and the water clarity is almost identical.  The real difference is the Malheur River is a wider river with a more diverse bio-mass.  The Malheur  also has a great population of aquatic insects like the Owyhee.  While I was there last (in mid-September) I saw a nice Blue Winged Olive (Baetis) Mayfly hatch as well as numerous Caddis flies throughout the morning and afternoon.  Although I didn’t see many trout rising to any of these hatches there is plenty of food for these trout to feed on and get fat.

I arrived early after the long drive to the river (2.5 hours) and after a quick walk along the shore it became obvious to me that I would be nymph fishing.  Don, my fly fishing  partner, had been to the river previously and recommended that we wade across the river and begin are fishing from the of opposite side of the river.  So I grabbed my wading staff and proceeded to pick my way across.  By the time I reached the opposite shore Don was just beginning his crossing.  While Don was crossing the river I bided my time by catching 2 nice rainbow trout on a size 16 Flashback PMD Nymph.  After releasing the first trout I watched Don catch and release at least 4 trout before finding the edge of shore.  Once we met up we both chuckled and knew this was going to be an epic day on the river.

Up to this point all the trout we tricked on our nymphs had been relatively small trout by Idaho standards but fun none the less.  Don who is an accomplished Euro style nymph fisherman plied his trade like a master and I marveled at his expertise and technique.  He is quite a contrast to my Drop Shot Nymphing style but as a team we worked the river like a well-oiled machine.  It wasn’t until Don stuck the lip of an 18 inch rainbow and brought the hen to net that I realized the high quality of trout that live in this river.  Soon after Don released his trout I caught and released my own 18 inch rainbow. There was now no doubt I was fly fishing a gem of a river.

For those of you who now are interested in giving the Malheur River a try you can camp at the campground we parked at or you can rent a room at the Oasis Café and Motel in Juntura.  The Café is open between 7:30am to 9:30pm.  The Oasis Café makes a rather good breakfast and the rooms are clean. Not bad for only $70 a night.  Also at the same establishment you can hook up your RV to the Oasis RV Park if you don’t want to travel the 18 miles to the river with your RV.  If you choose to camp, which is what I prefer the only amenity at Riverside is a clean and modern outhouse.  The best time of year to fly fish the Malheur River is in the spring and then late summer through fall.  It’s best to fish the river  before and after the high irrigation flows that increase the size of the river making it difficult to wade the river. 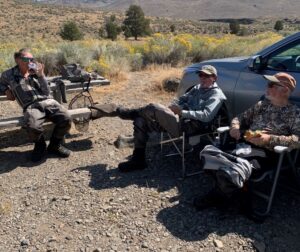 Around 9:15 in the morning the other half of our party showed up on the river.  Gary and Joe completed our group and the two new anglers quickly showed their exceptional nymphing skills by taking a straight fly rod and promptly getting those fish guns to bend to the weight of numerous trout.  As a group we had no problem sharing the river, the river is wide and the currents diverse, as we moved in and amongst ourselves to get at the various seams and boulders in the river.  Nymphing is a how fly anglers present artificial flies to trout who are not feeding on the surface.  We drift our flies (nymphs) along or near the bottom until some hungry trout is tricked into eating it.  There are numerous styles or ways to nymph fish and each one in our party were hard at work in the preferred style of nymphing.  It was fun to go from watching Don, a true French style nympher, to watching Joe a more traditional straight-line nympher. Whatever style on nymphing these guys preferred made little difference to the trout as we all were catching trout regularly.

As I rounded the bend just down from a small island I found a solid section of boulder strewn river that looked too good to be true.  Well good it was going to be.  I read and measured the river before, found a safe entry point then slowly waded in.  I presented my flies just outside the current line or seam and drifted my nymphs slightly faster than the current when like a streak of lightning my fly rod was nearly  pulled out of my hand by a raw, wild and angry rainbow trout that took offense to being stuck by my fly. After gaining my composure I had my hands full as this trout decided his best defense is to swim down river pulling as much fly line as possible from my reel.  Once I figured out what this trout’s strategy was I worked my way to shore and began to give an aggressive side pressure as I began to get my fly line back on my reel.  Every time I felt I had him tired out off down river he would head. This went on and on until I was able to tire him out enough to bring to hand.  I say him for he was a beautiful 21 inch rainbow buck.  After fish whispering him back to health I gently raised my hands and admired him another minute or two at my feet before he gently swam back into the current. 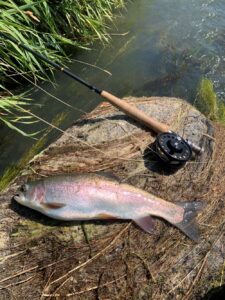 After numerous experiences like that we all decided to break for lunch and entertain ourselves over sandwiches with our exploits on the river battling monster trout.  I’m not sure what’s more fun fighting a 16 inch rainbow or listening over lunch to someone else’s experience of doing the same.  Each is rich in flavor and humor that will  lends itself to much thought over those cold winter days that are soon coming.  It’s a rare day that you can get four good fly fishermen together and have them all agree to the same thing. Today was such a day, we all agreed that today was the best day of fly fishing any of us have  experienced all year.  That in itself should convince you on how this river can fish. What makes a good lunch break even better is knowing that soon you will be back on the river catching trout again only this time with a full stomach.

Back to fly fishing again I walked down to the river to begin the crossing one more time.  My intent was to just cross the river and this time work my way up river.  The problem was I couldn’t stop catching trout and it took crossing the river forever.  These trout I caught were not of the large type but any trout to hand is fun and enriches the experience.  I could go on about what was the magic nymph I used to catch over 40 trout but honestly all of us caught over 40 trout and each of us caught them on different flies and I know for myself that I used at least a dozen different patterns.  If there is a point to this it’s it just didn’t matter what nymph we used, we all agreed the important thing was to just get the nymph in front of the trout’s face and then set the hook.

I’ve been living and fly fishing in the Treasure Valley for nearly 30 years.  During this time, up until my recent time on the Malheur River, I can count on one finger how many folks that I know who have fished this river.  That being said the only folks to read this Journal are folks who belong the Virtual Fly Fishing Academy.  This one Fisherman’s Journal entry may save you the 30 years of waiting it cost me and certainly worth the price of entry.