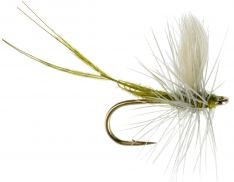 If there is one mayfly that can confuse fly anglers it’s the Blue Winged Olive (Baetis).  The Blue Winged Olive is the most important mayfly in the diet of all trout.  By proxy, the BWO is the most important mayfly to all fly anglers.  The reason is, the BWO is the only mayfly that hatches twice a year.  It’s the first mayfly to emerge in the early spring and the last mayfly that will emerge again in the Fall and continue into the Winter.  Another way of saying it is the BWO is the first real meal trout have had since Winter causing them to feed voraciously on them and the last meal they will have in abundance until spring resulting in the same feeding habit.

The confusing part of this beauty is the BWO’s that emerge in the Spring are larger than those that emerge in the fall.  Generally the Fall hatch is in the size 20 category and the Spring hatch is in the size 18 category.  The confusion, from a scientific stand point, is you will not catch a Fall trout on a size 18 BWO that you were using in the Spring and you can’t use a size 20 BWO that you were using in the Fall to catch a Spring trout.  The root of the problem, from the trout’s perspective, is really a simple concept in which the trout has little or no cognitive thought. If a size 20 BWO in what’s on the menu then a size 18 BWO is not food and visa versa.  If a trout had cognitive thought then it would know that there is no difference between a size 20 and a size 18 BWO, they are both food.

Where we go wrong is in two areas.  The first area is we don’t know or understand the above concept.  Often we find it hard to comprehend or believe that our quarry the trout isn’t capable of figuring out the difference in size.  This lack of belief or understanding  will show in your lack of success when trout are feeding on BWO’s right in front of your and you can’t land one. The other area is our lack of organization of our flies into a system of fly boxes built on aquatic entomology rather that pretty boxes filled with pretty flies. There is not much I or you can do if you don’t buy into the concept that trout have little or no cognitive thought.  To explain here why trout do what they do, would for me, to be like opening Pandora’s Box.  I could, and many have, write a book on just this one concept.  For you, at this moment you will have to trust me.

Many fly anglers new to fly fishing or skilled anglers who just don’t understand the above concept will approach a BWO hatch with a box of dry flies.  There first choice of matching BWO will be what ever BWO patterns that happen to be in their fly box.  Their first choice is picking a good representation of what they may see on the water.  Depending on what season this hatch is occurring, Spring or Fall, their first choice of a BWO fly should be size then representation.  You will have a greater chance of catching more trout using the right fly than a correct fly match.

For the Fall or Spring BWO hatch you want only one fly box.  During the Fall emergence of BWO you should only have one fly box for Blue Winged Olives.  That one fly box will only have size 20 BWO’s in it.  It will contain various patterns of nymphal emergers, hatching emergers and adult duns.  Your first fly that you tie on should best match the natural that you see emerging, either dun or emerger.  If the feeding trout ignore your offering then it’s back to the box for the next fly that best matches the natural until you find the right fly that best matches what the trout are seeing in abundance.  This choice is generally the key that unlocks the emergence and you should begin to catch trout as quickly as your cast will allow.  This is “Working the progression.”

The result is you should have two fly boxes.  One labeled Spring BWO’s and the other labeled Fall BWO’s. Your fly box containing Fall BWO’s will only have size 20 BWO’s.  Today their fare available to the public in most fly shops and box stores flat magnetic fly boxes with clear lids that allow you to view your flies without opening the lid.  During a BWO hatch that I may be working over you may see me standing in the middle of the river staring into one of these types of fly boxes.  I’m usually in thought on what my next fly to use while “Working the Progression.”

Late summer, all of Fall and of course the Winter are some of the best times for me to be on the rivers because I know that sooner or later I’m going to see trout feeding to tiny BWO’s.  There are only two things that catch trout: the fly and the fly rod.  I will not be short on flies and I’m fairly good with a fly rod. If I see trout rising…