The North Fork Payette River is a tailwater river, It is born from the dam at Cascade Reservoir in Cascade Idaho off Hwy 55.  I’m usually fly fishing this river every year the whole of October after the wizard behind the curtain at Cascade Reservoir turns the water down to a manageable level.  When that does happen the NF Payette is a magical river to fish.  In years past I’ve almost exclusively nymph fished this river.  Sometimes in a Blue Moon you can fly fish this river in the Spring before the wizard turns the water back on.  However, the NF Payette remains almost unfishable during the summer due to high water levels.  Remember this is a tailwater river and the water is used to irrigate farmers fields in Idaho, Oregon and Washington.

But during the times when the water levels are fishable this river takes on a magical feeling for me for reasons 0ther than the fishing.  During that time of year I will be fishing this river and have a 30 mile stretch of river pretty much all to myself.  Simply put this river just does not get fished.  You will find an angler or two on the river from time to time but it’s thirty miles of river and there is plenty of room.  Another reason I like to fish this river is because it’s only 45 minutes from home with amenities like restaurants and gas stations.  There are plenty of campgrounds and picnic areas and you can pull off the road at almost any pull out and find a nice tailout to fly fish.  Because this is a tailwater river much of the fly fishing I do there is nymph fishing.  Bouncing nymphs on the bottom until I land a nice rainbow.  That’s just the way it’s normally done.

My last trip there I did not put much thought into what I would be doing on the river, having fished the river so many times that my fishing on the river has become predictable.  When I arrived at my favorite place on the river to start I grabbed my nymph rod and gear and climbed down to the river and began nymphing.  Using the normal nymphs that I usually use I slapped the water for thirty minutes before wondering why I had not even had a bite.  Normally I’ve caught a couple of rainbows by that time.  As I continued to fish my thoughts were no longer on what I was doing but what were the trout doing and why won’t they eat my nymphs.  Finally I set the rod down and decided to start at my nymph boxes and change flies.  Thirty minutes later and a half dozen nymphs later my results were the same.  No bites and no fish.

Time to take a break.  I did notice quite a few very small black Midge adult flies buzzing around but not a single trout had made a dimple on the surface so I was pretty sure putting on a dry fly was not the answer.  Sometimes, more often than not, the fishing is just not very good.  I was not yet ready to throw in the towel, and for the lack of a more intellectual solution I went back to the river without my fly rod to turn some rocks over and seine the river for clues.  After about fifteen minutes of that the conclusion was still the same, I just didn’t know what, if anything the trout in the NF Payette were eating if they were eating at all.

The only way I know how to figure out what trout are eating outside of an obvious hatch is to pump the stomach of one and actually look at the contents.  This being my only recourse left me right back to the beginning.  You have to catch a fish first before you can pump their contents.  So back to the river I went with my rod and nymphs,

Dragging the bottom in search for the first elusive trout.  As luck might have it I finally hooked and landed my first trout of the day on a common bead head pheasant tail nymph.  Before I released this trout back into the river I dutifully, with care, pumped the contents of the trout’s stomach into a petri dish.  My first reaction upon seeing the contents were there had to be over a hundred bugs in this trout’s stomach.  I now could cross off any speculation that the trout in the NF Payette River were simply not feeding.  The next thing I notice were the contents of this trout’s stomach were size 20 black midge pupa.  Lastly I now knew the reason I was not connecting with any trout the past hour because whatever I was offering them to eat  was not on their menu.  The special of the day was size 20 black midge pupa.

With a solution to my lack of catching trout solved it was now time to see if my solution would lead to catching more trout.  I tied onto my drop shot leader two size 20 black zebra midges on size 5X tippet and proceeded to rework the water I had previously fished.  On my third cast I was onto a nice fourteen inch rainbow but near my net he managed to throw my fly.  Two or three casts later I was again onto trout, only this time I just got my first double header of the season.  I hooked and landed trout on both flies making it a two for one cast.  These trout were also in the fourteen inch class and I did manage to net both in one net.  Every fourth or fifth cast produced a trout to hand. 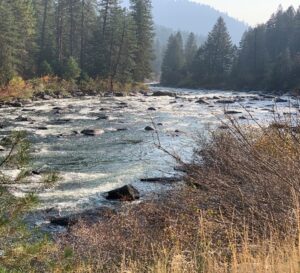 I went from no trout to lots of trout for the remainder of the day.  Fly fishing is the only cerebral form of fishing there is.  To often folks who are transitioning from spin fishing to fly fishing bring the mentality of spin fishing to fly fishing.  They begin their fly fishing careers with a spin fishing mentality.  Fly fishing is different than any other form of fishing and I believe this is why many folks thrive in fly fishing.  My problem of not catching trout on a river where I have never not been able to do so required me to really concentrate on many different things that could be causing me not to catch fish.  I just didn’t keep hammering the river over and over all day hoping to hook up with a trout.  I viewed my situation as a problem and sought out a solution.

I also believe in luck to some degree.  In the above story I was getting close to the frustration point when I was “Lucky” enough to catch a trout.  When this happened I was then able to continue my problem solving by looking at the contents of the trout’s stomach thus giving me a new solution to my lack of catching.  The logical assessment from the contents lead me to believe my problem was simple, I was not nymphing with a fly that best represented what the trout in the river were feeding on near the bottom of the river.  Based on the information I had, a quick fly change and I was now into trout.

I’m prepared, and so should you, to be confronted with some sort of fly fishing problem almost every time I go fly fishing.  Now days, for me anyway, I look forward to this kind of challenge.  It’s kind of like someone who loves to put puzzles together.  The more difficult the puzzle  the more pleasure he or she derives from the act.  For fly fishers it’s all about catching trout.  That is the puzzle.  To make good logical solutions on a river you first must have the right tools.  I can be the best auto mechanic in the area but I’m no going to do much good without any tools to do the job. 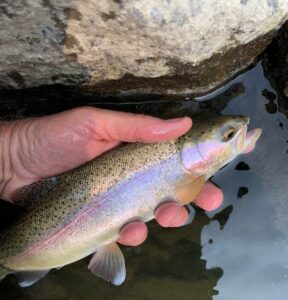 For a fly fisher these tools first consist with knowledge.  It helps to know a little bit about what trout eat.  I happen to know a lot about aquatic entomology and how trout eat aquatic bugs.  I keep with me, at the truck, two or three written guides on aquatic entomology that I do refer to from time to time.  If I do it, and you are new to the game then you should too.  You can carry knowledge to the river.  I also carry a seine that covers my net, a shrimp net or aquarium net and a stomach pump.  These are the tools a smart fly fisher will have in his or her vest.  These are small items and easy to stow away.  The stomach pump comes with directions and the others are self-explanatory.  Problems that you may be faced with on a river may not require all the use of the mentioned tools, it may only require a seine to show you what feeding trout are feeding on and the size of the bug.  A mechanic has available a myriad of tools to do a repair job but may only use one or two to do the job.  The point here is you are going to be presented with many fly fishing problems during your fly fishing career.   Solving fly fishing problems on the river requires thought and a process.  Have the necessary tools so that you can begin the process.

Where to Fly Fish in the Fall (SW Idaho) – Mike Sandifer