The South Fork of the Snake River in eastern Idaho is regarded as one of the finest trout fisheries in the country. It’s known to have exceptional dry fly fishing and it boasts over 5,177 fish per mile. It is truly the kind of place that any avid fly fisherman in the Northwest should plan to visit. Compared to the Boise River (or anywhere else I fish for that matter) it is enormous, almost daunting. During my latest visit the flow was a little over 7000 CFS and that was low compared to my visit in the spring when it was running over 12000 CFS. The way you read the water in such a big river and learning where trout will be holding can be a challenge but I think that’s part of the fun of getting dialed in on a new river. I just returned from an amazing week of fishing on the South Fork. Some of it was absolutely dynamite and some of it definitely humbling. 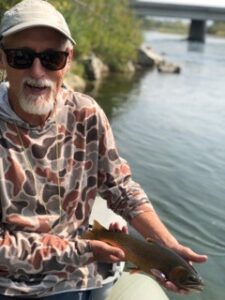 I hooked up to my raft trailer, grabbed a couple fishing buddies (my parents), and made the drive to Swan Valley. I was hoping to throw hoppers and golden stones for the next week and to see a lot of fish crush big dries. On our first full day float we fished the upper river and started off pounding the banks with a hopper dropper rig. We got a few refusals but that was 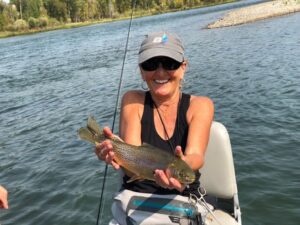 definitely less than we had been hoping for. I decided to lengthen my dropper and cast away from the bank into the color change where the river bottom drops off. A few casts later I hooked into an angry 20” cut-bow. We started fishing the deeper water after that and did much better. We all caught fish but when my mom pulled out the nymphing rod she was constantly bugging us to net her fish…. It was a little annoying.

The next few days we decided to float below the canyon. The hay fields next to the river had been cut and baled so the grasshoppers were supposed to have been pushed down closer to the river and that was absolutely true. We floated the 7.8 miles from Twin Bridges to Lorenzo throwing water-walker stoneflies and hoppers. We were only throwing the big dries (hoppers and golden stoneflies) and stuck some nice fish but it wasn’t a big numbers day. Unfortunately we lost or straightened the hooks of all the big hoppers I had tied for the trip trying to get a little too close to the bank and in tight to log jams. I also lost a very big brown due to a bad knot that still haunts me. The next morning we hit up a fly shop to grab some foam artillery and ran the 13 mile stretch from Byington to Lorenzo. It was a sunny day. There aren’t as many mayflies in the lower river because the river bottom is sandier than up above, so I decided we should drop size 16 zebra midges 30 inches below the hoppers with a small split shot to get them down. It turns out this was the perfect thing to do. As soon as we started, we were getting into cutthroat and browns on the dries and the nymphs. I don’t think we had floated more than a mile before we had 10 hookups. I’m not exaggerating when I say that we got 50 trout to the net that day. The fishing started off unbelievably well and hardly slowed down as our float continued. The only difference was that there are fewer fish down in the lower stretch. 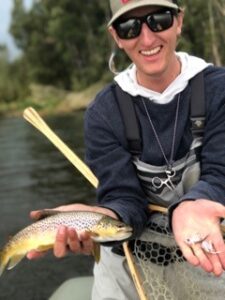 Most tailwaters have more, but generally smaller trout closer to the dam and fewer, but larger trout lower in the river. We kept on making the hoppers twitch by doing a big mend just after they land (or a reach cast) to get the fly line upstream of the bug and small mends every couple seconds that make the fly move just enough to get the rubber legs to kick. Most importantly, just before recasting we gently lifted the rod while doing a lateral wiggle of the rod tip and skating the fly a foot or so before picking it up. Most of the big fish that took the hoppers would hit just after the twitch or on the wiggle-skate just before we were going to pick up to recast. I’m now a firm believer that if you’re not twitching your hoppers you are leaving fish on the table. Before we started doing this we would often have fish eat just as we pulled the fly into a backcast and thus right out of their mouth. It got a little frustrating.

The last day that we floated it was a little overcast and a storm was rolling in. I had been wanting to throw streamers in the lower stretch of the river because there are some incredibly fishy zones and lots of wood structure in the river. As the day progressed my parents were getting into fish but I was getting skunked. When the sun came out I would throw hoppers and when clouds blocked out the sun I was streamer fishing with a black boogieman trailed with an olive bugger. We were half-way done with the float and I had zero hookups and had lost both streamers in a submerged tree branch that I swear looked like a big trout. I changed out the black boogieman for a white one and broke out the hopper dropper rig again. I had very little confidence in the flies I was fishing so I tied on a new nymph for my dropper. We were moving through a fishy looking riffle when my hopper twitched and I set the hook. This time It wasn’t a rock, but a four inch whitefish. Hey, a fish is a fish right? At that point I was pretty excited to have anything wiggling on the end of my line! The ice was broken and I was back in the game. It wasn’t long until an 18 inch cutthroat exploded on my hopper and things were looking up again. I brought a few more trout in on the dry fly and decided it was time to work the streamer again. I had a bunch of fish follow it and made a terrible hookset on what felt like a school bus with fins. We were approaching a log jam at the head of an island where the day before I had not one but two trout miss my dry f 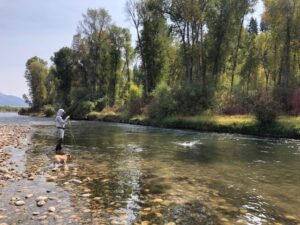 ly. I made a perfect 50 foot cast that would let me strip my fly parallel to a submerged tree where I knew there were trout holding. The fly landed. I gave it two strips, let it pause and hover, gave it one more strip and I felt the take. I screamed like a little girl and gave the line a wicked strip set, bending the rod hard to my right and stripping in line to apply heavy side pressure, trying to pull the trout out of the snags before It could railroad into the sticks and get tangled. Thankfully I steered the trout into the main channel of the river in time and after a couple exciting runs landed a gorgeous brown trout. This was definitely my most memorable fish of the trip. It wasn’t the biggest, my mom once again pulled this off, but returning to where I missed a fish the day before and sticking one on a big streamer in the same place was really cool!