How is the Fishing? – Mike Sandifer 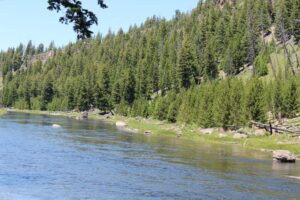 How many times have you been out fishing and ran into another fly fisherman and were asked “How’s the fishing”?  Or just the opposite you asked them “How’s the fishing”?  It’s an interesting questions and the response is almost always a mystery.  The answer can sometimes be as difficult to interpret as Einstein’s theory of relativity.  It makes perfect since to a physicist but draws a blank stare from your average Joe.  Now I realize that I’m overcomplicating the question but none the less it can be quite compelling in some instances.

For me, a good day on the river was five fish caught and released and for you on the same river twenty fish caught and released was a good day.  Do you start to see confusion?  In my home town newspaper there is a fishing section with a fish report.  In this report are all the rivers and stream the local folks like to fish and next to the names of the rivers are little fish that represent how good the fishing is at that river.  The more fish (up to five) by the river the better the fishing is.   So we’re back to square one.  Did the reporter who writes that column catch one fish or twenty?  Did the guy he got the information from catch one or twenty?  What makes a four fish river better than a three fish river?  How many fishermen did he interview to come to his conclusions?  Well the math can be overwhelming and you probably start to get my drift by now.

Today many fly fishermen use the internet to help decide where they will be fishing the upcoming weekend.  There are many fly shops that have web sites with pages dedicated to quality fishing reports that are both useful and informative.  Today fly fishermen can get pretty much all the information they need to make a successful fishing weekend right on the internet.  However it still boils down to what a human says about how the fishing is.  Instead of verbal answer to the “How’s the fishing” it’s a written answer to the same question.  Most fly shops get their fishing reports from their guides working on the river you wish to fish. 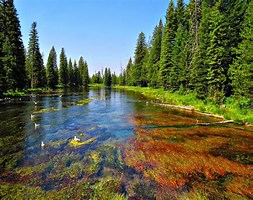 One year on the Henry’s Fork in Eastern Idaho while my fishing partners were preparing their equipment and boat for the day I went to park my truck after launching the drift boat.  As I was doing so I ran into a fellow doing the same thing.  He looked like a guide to me who had been down the river a few times already.  So I asked him the question “How’s the fishing”.  His answer was “Excellent” and I was infused with anticipation of “Excellent” fishing for me and my fishing partners for the upcoming float.  Before leaving the boat ramp I had time to go over with my new friend the guide what kind of flies should I be using and how the river should be fished for the day.

The guys and I boarded the drift boat and headed down the river to hopefully an “excellent” day’s trout fishing.  One of the nice things about fishing from a drift boat, with three good oarsmen, is you get plenty of time to fish quality water.  We fished the river hard; we pounded the banks with every assortment of flies we had and pulled over to the side of the river when good trout water presented itself to us.  After around eight hours on the river we had caught a combined total of four trout.  When we finally arrived at the boat ramp I ran into the same guy I had asked previously “How’s the fishing”.  Well it was at the end of our fishing day and it was only appropriate that I end the day by asking the same guy the same question “How’s the fishing”.   He went on the say the fishing had been particularly good and that his sports had caught three big fat Trout.

I had thought that the fishing was slow and tough with only four Trout caught all day.  The guide I chatted with at the end of our float had said the fishing was exceptionally good.  So who’s right, the guide or me, well neither really.  As long as fly fishermen have opinions then there can be no right or wrong.  It’s just one of those little things in life that you can never figure out, or the question “How’s the fishing” can be taken as a rhetorical question that really means “What’s up” and leave it at that. 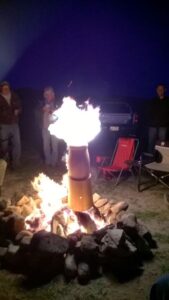 The problem is both good and bad opinions can be accurate.  I’ve been on rivers before when I was told ahead of time the fishing was lousy and sure enough the fishing was lousy.  On the other hand I love to fish rivers and streams that have been reported as slow fishing water.  The way I figure it nobody wants to go fishing on a river that’s been reported as slow fishing.  So I’ll go and have little fishing pressure, no false hopes and quite often catch quite a few trout in the process.

A while ago I was on my way to the Madison River in Southwest Montana to do some much needed fly fishing and had stopped at a fly shop after a five hour drive to pick up my fishing license.   This was a renowned fly shop on the Idaho border that guided all the rivers of the area including Montana with success.  At the front counter where I was buying my license the young lady waiting on me asked me where in Montana I was going to be fishing.  When I told her the Madison River she shook her head and said I’d have the whole river to myself.

Nobody ever has, or ever will have, the whole Madison River to fish without any fishing pressure.  So I asked the young lady why and she said the whole river was exceedingly high and muddy and that most fishermen were avoiding the river for better fishable water.  Sure enough when I walked outside and read the fish report on the chalk board it said the fishing on the Madison was slow due to high water.  I had driven all the way across Idaho to fish the Madison River and now people are saying the river was pretty much unfishable.

Now I usually listen to what knowledgeable fishing anglers say about certain things such as fly selection and river conditions and had no doubt the river was in bad shape.  However I had driven all the way up here so I just as well give it a go anyway.  When I arrived at the river I have to say I was intimidated by the river’s condition and had thoughts of pressing on to a more easily fished river.  But I was there and I might as well wet a line for a while.  When I approached the river bank ready to cast a line I couldn’t help but be a little disappointed.  The river was extremely high and very muddy but I went ahead and made my first cast.  Bingo!   On the first cast I had hooked into what felt like a shark.  I didn’t even have time to set the hook before half the line in my reel was screaming out through the rod guides.

When the surprise and shock of the initial fight wore off I began to get the upper hand on the trout.  After about a hundred yards of sprinting down the bank I finally managed to get the trout out of the current and began to take control.   I knew when his final run was over I had him and gently raised the largest Brown trout I had ever caught in the Madison River into my net.  After releasing him back to the river I knew I was going to have one of those rare perfect fishing days when after my second cast I was on to my second Brown of the day.  Two cast and two Brown Trout, not bad for a river to high, to muddy and slow fishing.  I went on to have a fantastic day’s fishing.  There was only one thing for sure on this fishing trip and that was I had the whole Madison River to my own.

There is no way of really knowing why I had such a good day’s fishing on a river that for all intents and purposes was close to being blown out.  After some personal debate I think the right amount of lead, the right fly selection and the willingness to lose quite a few flies was the right combination for me.  However if I had been asked “How’s the fishing” and responded in truth “Fantastic” and the angler asking went on to have a bad day’s fishing would have thought me crazy.  And I think that’s how it will always be.  Some look at it as the glass is half full and some look at it as half empty.  No one is right and no one is wrong.

I love to talk to other fly fishermen while I’m out fishing and I think asking “How’s the fishing” is still the appropriate question for breaking the ice.  Fish talk on a river or stream is still the best way to learn about fly fishing and if asking a stranger on the water “How’s the fishing “is the best way to make a friend then let’s just leave it at that.   Why ruin a good thing.