My Friend the Malad River 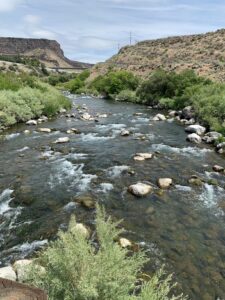 The Malad River is a Southwestern Idaho river and is among the shortest rivers in the world.  We classify rivers into two types: freestone rivers and tailwater rivers.  I have to scratch my head and rattle a few marbles when I try to classify the Malad.  In Southwestern Idaho there are a number of rivers and streams that will flow a great length and then disappear underground to reemerge again at the banks of the Snake River and gently flows into the Snake.  The Malad River is a mixture of these underground rivers, streams and spring creeks making a very fertile river.  So I guess you would have to classify the Malad River as one of those exceptions or arguments we sit around the campfire and debate.  The truth is the Malad River is a combination of all of those giving the trout that live there all the traits that these rivers and stream have. 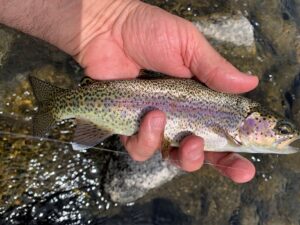 This being the case, then what we see on the Malad River is a river rich in aquatic life, biomass and hungry trout.  This usually mean that you can match the hatch or you can float an attractor fly like a Humpy high and dry on the surface and catch a lot of trout. In short it’s a river that gives up its trout easily.

I have sent many a new fly anglers there for their first trip fly fishing and the results have been extremely successful.  That means the river is extremely forgiving and will reward the hearty angler who’s not afraid to attack this river for its treasure.  This river is quite short in length and rugged so the trout there are not the big tailwater trout that you may be accustomed to if you enjoy that aspect of the sport.  A large trout in the Malad River may measure 13 inches with the average around 10 inches.  But then again you are not casting to finicky tailwater trout. 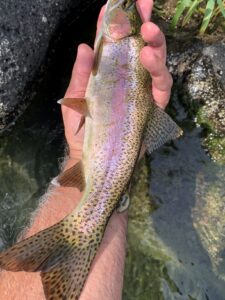 My first recollection on the possibility of fly fishing the Malad River came many years ago.  A local worm fisherman was telling me that the only river he fly fished was the Malad River.  This guy was born and raised in Hagerman Idaho which is only 5 minutes from the Malad River.  My first trip to the Malad River was a trip of discovery: I just had to find out about this little river.  Leaving Hwy. 84 I ventured down  Hwy. 30 about 10 minutes where my first  view of the river was where the Hwy crossed the Malad River.  I stopped alongside the bridge and looked down.  Way down in the bottom of the canyon was this white ribbon of a river.  There was no way I was going to hike down that canyon to fish a river I knew nothing about.  Fortunately for me when I turned right and started following the river the road finally reached the river at the power plant where I parked and got out for a look.

I was lucky enough to park near a likely spot on the river that looked like it might hold a trout so I grabbed my fish gun and walked over to that spot.  I had already tied on an Annihilator attractor dry fly so it was a matter of grabbing my rod, working my way down the bank and making my first cast.  My Annihilator floated down river about 2 feet and was attacked by a nice 10 inch rainbow trout that fought like he was 18 inches.  After I brought him to hand and released him I gently sat down on a rock and just smiled, chuckled a little bit and with a sigh I knew I had just found a new friend. Over the years I have often made many a camping trip to the area for the express purpose to cast little dry flies into the currents of my friend the Malad.

Recently I had an opportunity to visit the Malad River for my first trip there this year.  The Malad River looked as good as she usually looks, just like the first time I visited her.  She was flowing at around 300 cfs which is at the end of the scale for effective fly fishing but there is plenty of river to fish at these flows if you are patient and take your time.  That’s exactly the two virtues you need to enjoy the beauty.  The Malad River is best fished by moving slowly and placing yourself is a position where you can make an upriver cast working each little pocket or run from the bottom up.  This strategy could change quickly if a good hatch happens then you will need to reverse your cast to a downriver cast.  The area I spotted to try first was just upstream from the Snake River.  I spied a great tailout upriver and figured that was as good as any to try first.

Luck would have it that the tailout I wanted to fish had an easy access point and I made my way down.  Once on the river where I’m at water level it became apparent right away that I had picked out a perfect place to fish.  There was a ton of caddis in the bushes but none on the water.  I noticed a few size 18 BWO’s (Blue Winged Olive Mayfly) fluttering away and as luck would have it, I had tied on at home a size 18 BWO soft hackle emerger.  I figured I have it on why not give it a chance.  My first cast I could see the soft hackle just under the surface swim by me and from below a silver rocket slammed it with a good bend to the rod.  I made quick work of a nice 10 inch rainbow trout.

Having experienced Murphy’s law of “The curse of the first cast first fish” I hoped that my luck was not going to be going south.  My second cast was just as productive as my first as I brought to hand a beautiful 12 inch rainbow.  After about 10 minutes of drifting my soft hackle it became obvious that the BWO hatch was on and I switched to a BWO Klinkhammer hatching emerger size 18 and that’s when the large trout began to hammer this poor fly.  Each fight became more epic than the previous fight.  As I craftily worked to bring each one in using tact and finesse I soon gave up the macho fly fishing stuff and just muscled them in not caring if they came off.

This being Father’s Day I had to make my trip short on one of the shortest rivers known.  The time I spent there was fly fisherman free and with little traffic.  There is no one really good spot that’s better than any other on the Malad.  The trout are well dispersed through out the river.  If you have the legs of a Springbok then you can just gallop down the canyon and probably fish water that has never been fly fished.  But these old legs prefer a better access point but each time I fly fish the Malad River it seems I find a section of river that I’ve never fished before.  So if you are traveling Idaho and want to fish some water that is off the beaten trail and have a chance to cast tiny flies to rising trout give the Malad River a shot.  She may be kind enough to open her arms and make you one of her exclusive friends for life.